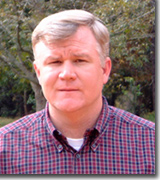 w fast their saw is turning no matter who manufactured the mill.

I will reveal from experience some facts that have been tried and proven. I will also discuss a few myths that are not true and have very little, if any, relevance to the formula of figuring the band speed.

First, you need to consider the horsepower and torque of your saw. The reason we do this first is because these are key elements in maintaining a constant band speed. Sawing logs is like a heavy loaded truck going up a hill. The truck can’t go up the hill in the highest gear; it has to downshift to a lower (slower) speed ratio to get the torque level up to climb the hill. Like the truck, so is our saw while in the cut. So it is just as important that the sawmill be set up with the proper ratios for optimum torque output.

While considering horsepower, note that if the hydraulic pump is driven using the motor then there will be a 5-10hp loss. Nothing wrong with that setup but it just means that a 25hp manual mill will be able to saw faster than a 25hp with a hydraulic pump because it is robbing horsepower from the blade. When we move into the 30hp and up category that 5-10hp loss is not as pronounced. But ultimately what that means in either case is that running the blade speed to achieve peak torque is vital to sawing performance. You are better off to stay in a safe zone and turn the blade slower and have the higher torque than turn too fast and have low torque.

Another consideration on a sawmill with 30 or more horsepower is friction. When the blade exceeds 5,500 fpm (feet per minute) it has to deal with a higher level of friction in the body of the blade. In the past we thought if we had adequate horsepower and torque that we could rev up the blade and saw faster. What we discovered is that friction became a major problem. We would run as high as 7000 fpm at the blade and when the blade came into contact with adverse knots or hard spots in the log that the friction encountered at these spots caused for bad sawing. We then would take the same sawmill and reduce the fpm to 5,500 and the problem disappeared. You might think that it would slow production down, but it did just the opposite. We picked up production and we increased our blade life simply from reducing friction and sawing at optimal torque. When friction is dropped from the equation the band is more stable.

The horsepower of your sawmill is the greatest factor in deciding how fast to turn the blade. There are other factors such as band wheel trueness. During our testing we noticed that the more horsepower we had at our disposal the faster we were able to turn the blade and still be able to saw. However, there was that point where progression stopped and issues became apparent and we consistently found this to be within a certain window of speed at the blade.

Remember that when you are figuring on your horsepower needs that electric motors deliver 25%-30% more torque for an equal amount of horsepower. In other words, a 15hp electric motor will have the output characteristics of a 20hp gas engine.

Here are some guidelines for different horsepower ratings based on our findings:

So, does the speed need to change for frozen logs? Yes. Through much testing we have concluded that optimum fpm when sawing frozen logs is 4,800 fpm.

I believe what happens in frozen logs when the tooth impacts the cut area is that when the wood fiber is cut the moisture in that cut partially thaws under impact from the friction. Then the dust from this cut that passes by the blade gullet will freeze back tight against the blade body and it acts like a brake pad pressing against the body of the band. This in turn causes heat and makes the band stretch and saw badly.

By slowing the band down under these conditions it allows the tooth to get a little larger dust bite and the larger dust will not pass by the gullet as easy as before and therefore gets carried out of the cut instead of bypassing the gullet. Every little bit of help we give ourselves here is positive.

At the slower speed the band does not have the friction level to deal with and will not heat up as much, and this will keep the band stronger as heated metal becomes weak.

A formula for figuring feet per minute of the blade looks something like this:

First figure the band wheel circumference – Diameter of the wheel x 3.14 = then divide by 12

The next thing that has to be done is figuring how we are going to get that rpm at the shaft.

In conclusion: The band needs constant speed with torque more than it needs speed. If you will match the blade speed to the horsepower and torque you will have a great cutting sawmill. 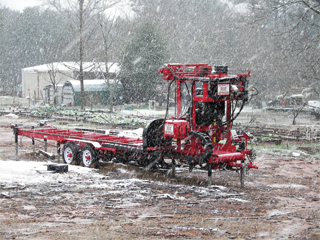